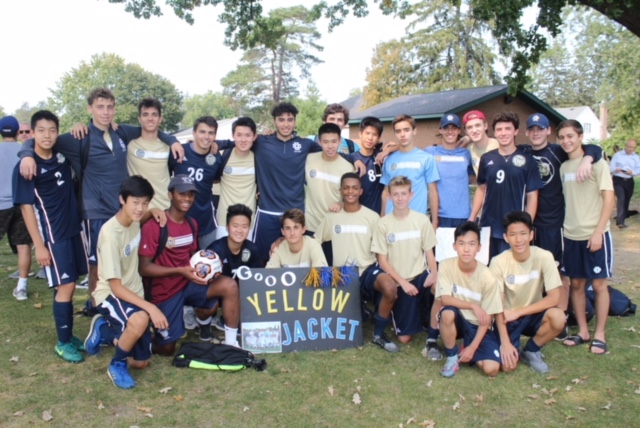 The Detroit Country Day community has always been proud of our Varsity Men’s Soccer team.

This year is one to be especially commended. The team has been through various changes, including three new coaches and the addition of many skillful freshmen. To this day, their current season parades 10 wins, including a glorious triumph over DCD’s greatest rivals – Cranbrook.

The Varsity team is looking forward to their Senior Night on Monday, October 16, 2017 against Cesar Chavez. The captains, along with Avi Bedi, Jake Belanger, Pano Cardasis, Tino Cardasis, Jae Chang, Carter Elrod, Peter Gallette, Andrew He, Quinton Sappington, and Kareem Tayeb will be recognized. Let’s bring out the barnyard and support our boys on their achievements so far this season!

As we get closer and closer to the end of fall sports season, the soccer team is eager and confident to head into the State Championship.

I sat down with the four captains of the team – Garret Fragnoli, Michael O’Brien, Kevin Huang, and Dylan Prime – to speak with them about their season:

2. Has there been improvement within the team since last year? How?
Fragnoli: We’ve seen a lot of improvement this year. Last year focused on building, as we got a lot of new players that didn’t have varsity experience. This year we were able to take our past experiences and add great freshman talent to the mix.
Huang: We were young and pretty inexperienced, but our players have really stepped up and worked hard over the summer to improve.
O’Brien: It’s basically the same team, just older, with some additions of amazing freshmen players.
Prime: We had a smaller senior class (CO 2017). But this year, all of our returning varsity members have taken great strides as players. The freshmen additions are incredible, and they have been a huge boost to our team.

3. What has been the highlight of the 2017 season so far?
Fragnoli: Beating Cranbrook was definitely the highlight.
Huang: Personally, I have to go with my spectacular tap in goal against Imlay City. This is the only goal I’ve ever scored which hasn’t been a penalty kick.
O’Brien: I think everyone would agree that the highlight of the season has been beating our Cranbrook. They’ve ended our season the past two years, so it was finally good to get some revenge.
Prime: So far, the highlight of has definitely been beating Cranbrook at their home field. Being our perennial rival, they are a D2 team with exceptional players and coaching. We hadn’t beaten Cranbrook for five years, it was a huge win for us.

5. If you could give some advice to the next 10 generations of DCD soccer players,
what would it be?
Fragnoli: My advice to the future of Country Day soccer: don’t take a second for granted. These four years fly by and there is nothing more special than playing alongside your best friends, so make sure you enjoy it while you still can.
Huang: Cherish your memories on the team. No sport Country Day has to offer can compare to the fun you’ll have playing soccer. You’ll become family with your teammates whether you like it or not, maybe even too close for comfort, but the experience will be unlike any other.
O’Brien: It’s not about how good you are. It’s about how hard you work. If you work your hardest, then you can never be disappointed with a game, win or loss.
Prime: Stick together as a team and be patient throughout the process. Each year, the varsity soccer team has around 20 games during the three-month season. There are highs and lows, so at times it can be  tough to stay focused and optimistic. Our program has an illustrious history, and it’s important to know you represent all the players and coaches who’ve played before you, and will play after you.

6. What are your thoughts on the state championship coming up?
Fragnoli: We have a very solid team this year and we are looking forward to bringing our best to each and every game. We want to be the ones raising the trophy in November.
Huang: The upcoming state championship will be one to look out for. Our team has the potential to beat any opponent, and I believe we stand an equal or higher chance of winning over other D3 powerhouses, such as Flint Powers or Grosse Ile.
O’Brien: I think we have a good chance at winning states, especially because we have a lot of people who want it. We have to play some good teams to win it, but if we play our best, there is nobody in our division who can compete with us.
Prime: I am looking forward to making a deep playoff run, and hopefully coming out a D3 State Champion. We are 10-5- 2, and haven’t lost a game since early September, so we will be going into playoffs on a hot streak. There’s nothing I want more than to win it for this team, and the players who’ve played for DCD before us. I feel something special about this group, and I really think we are going to win it this year.

7. Funniest moments.
Fragnoli: One time, on the field, Plymouth Christian asked us to mercy them so they could go home.
Huang: We dumped water on sleeping underclassmen during our pre-season training camp.
O’Brien: Let me just show you. This is our assistant coach Ricardo. Pay special attention to the charger. 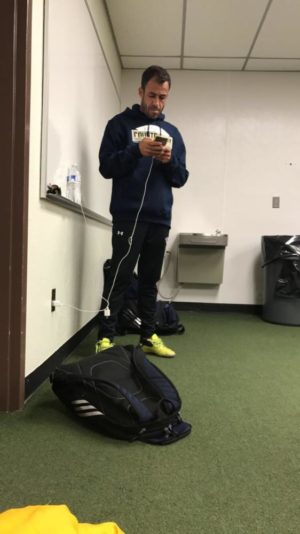 Prime: During our summer trip up to Boyne Mountains, Gabe was supposed to bake Toll House cookies for the team. He didn’t follow the instructions, setting the temperature of the oven to 550 degrees instead of 350. 20 minutes later, he set off the fire alarm, the condo filled with smoke, and we had to go outside… Gabe didn’t make any more cookies that trip.

Good luck to the rest of your season boys, DCD stands behind you.

One Comment on “The Beginning of the Run: DCD Soccer Captains Tell All”