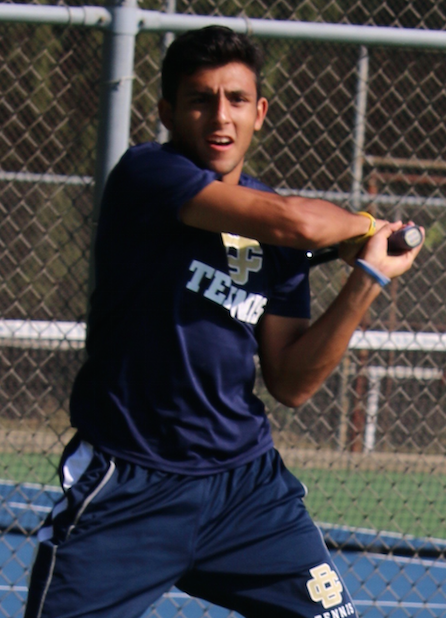 Varsity men’s tennis has finally concluded and the boys just came back from a heartbreakingly close state championship tournament. The team started the season with a pair of victories against Clarkston (5-3) and Grand Rapids Forest Hills Central (5-3), which included many convincing wins. After a strong showing at regionals, the team turned their eyes toward the state trophy.
When asked about the team’s chances this season, senior captain Milind Rao explained, “Michael Khaghany is our best player and our seed one singles, but the competition is so tough at that spot that he doesn’t have as good of a chance as our two seed doubles or singles.” The two seed doubles team, Milind and Kavon Rahmani, followed their win at the regional tournament by winning the state championship. Before the state tournament, Rao elaborated, “Our toughest competition is always Cranbrook. They claimed the state title last year and they’re strong again,” Milind continued, “We’ve been focused on them since day one.”  Taking down Cranbrook proved difficult, as the jackets were edged by a margin of a point, finishing in second place.
As for the other seeds, one singles, senior captain Michael Khaghany, reached the semifinal round and two singles reached the finals, while only the four seed singles won their bracket. In doubles,  the one seed team of Ryan Murakawa and Ricky Warnicke lost to Cranbrook in the finals,  as did four seed Prathik Chukkapalli and Nick Sicilia, however the three seed, Tommy Nardicchio and Nathan Thewes, won their respective state titles.
Throughout the season, the varsity underclassmen continued to develop and win matches for the team.  Looking at the upperclassmen role models on the team, it isn’t hard to believe how much the younger team members have improved. “The seniors and juniors have set a good example for the underclassmen in terms of how to act on and off the court.” Milind added, “Aside from a few racket smashes, our upperclassmen have been great role models.” There’s no doubt that they’re being trained by the best in the state, and we hope they can contribute to a huge team redemption at states next season. One Comment on “Men’s Tennis Topped in State Finals”